WHERE DOES ALL THE GARBAGE GO?

By Tom Watson
We tend to assume that when we take our garbage to the curb on Mondays that it will be handled properly. It is out of sight and out of mind. However our health, drinking water, recreational waters and the general beauty of our landscape all depend on its proper handling. I decided to see what happens to our garbage, so I drove out to the Coastal Environmental Partnership’s facility at Tuscarora. My host, Planner/Outreach Coordinator, Bobbi Waters, arranged for me to talk with the Operations Manager, David Warmack, and Finance Officer, Miriam Sumner, and then took me on a tour. 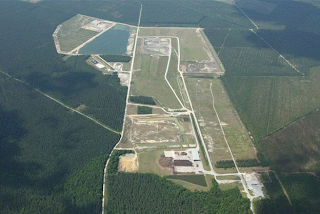 The landfill operation is highly technical, and much cleaner and more pleasant than I expected. Before any trash can be deposited, a site must be prepared with the following steps:
All of the above is to protect the ground water from contamination. In operation the runoff and leachate from the garbage averages 6,000 gallons per day. The solids are settled out and the water goes through two stages of aeration. It is then pumped into trucks and taken to the City of New Bern’s waste water treatment plant for final treatment. Samples from test wells around the perimeter are analyzed to ensure that the ground water is protected. 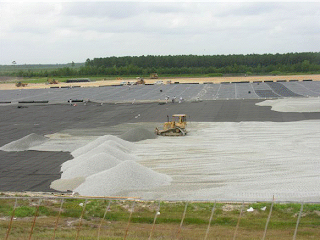 Roughly 700 tons of trash/garbage is taken to the landfill by trucks each day. On arrival it weighs 350 pounds per cubic yard. After several by passes a 120,000 pound spiked wheeled compactor, the trash weighs 1400 pounds per cubic yard. Trash and garbage are in layers separated with earth. As more and more layers are added, quite a mountain results. The altitude of the completed section of landfill is 145 feet, the highest elevation in Craven County! 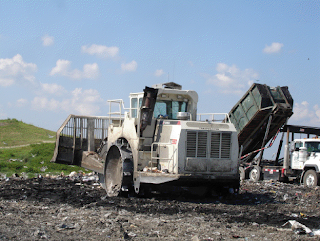 Once in the landfill the organic material begins to decompose. The gaseous products are Methane (CH4) and CO2. These along with some traces of other gasses are known as Landfill Gas (LFG). Currently 47 LFG wells collect 1,350,000 cubic feet of LFG per day. These gasses are sold to INGENCO, a power generating plant on property adjacent to the Coastal Environmental Partnership.

Operator Jose Delgado told me that INGENCO operates eight to ten Detroit Diesel engine driven generators 24 hours a day, 365 day a year. The fuel for the engines is about 95% LFG supplemented by 5% diesel. INGENCO generates from three to six megawatts of power and sells it to Progress Energy. The amount varies depending on the weather. Generally more LFG is collected in summer than in winter. The power generated is about the amount required to supply Taberna, Fairfield Harbour, and Greenbrier. 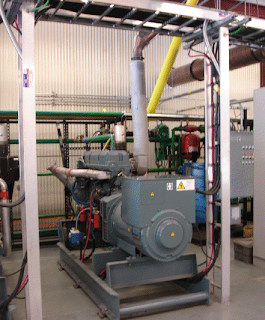 One of INGENCO’s diesel driven generators.

It is hard to believe that such a facility is operating just north of US 70, but the landfill serves us every day. It has been in operation for 16 years, and has 27 more years currently permitted. The Coastal Environmental Partnership has enough land to develop for 30 years after that.

Bobbi Waters would be happy to take anyone or a group through to see the operation. Her phone number is 252 633 1564. 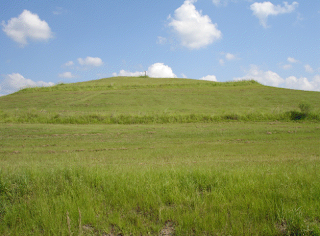 The completed part of the Coastal Environmental Partnership’s landfill; the highest point in Craven County.

Less Means More demonstrates how using less water today means more for the future. We can’t afford to ignore this critical challenge and we invite every resident in the county to join in our mission. Our future and the future of our children depends on it.